Supporting the Race Against Blood Cancer

After successfully completing several triathlons, our team of dedicated recruitment consultants and hardworking support staff are set to get out from behind their desks to take part once again. The team will be taking part in the world’s largest triathlon in London to raise money for an incredibly worthy cause, The Race Against Blood Cancer as I mentioned in my blog post earlier this year.

Competing in an iconic Triathlon

This year’s event will mark the third sporting event that we have entered in partnership with our sister company Hoxton Circle. Eighteen consultants and support staff from across the two organisations will compete alongside 13,000 participants from around the globe in the world’s most iconic triathlon on 22nd July, and this year the team has chosen to raise money on behalf of Race Against Blood Cancer.

Why are we supporting the Race Against Blood Cancer?

Race Against Blood Cancer is a non-profit charity whose goal is to increase the volume and diversity of people who register as potentially life-saving donors. The Charity is working tirelessly to help to eliminate barriers to registration such as misconceptions about blood cancer, lack of information and confusion about the sign-up process. It invests in and organises a number of initiatives in order to raise awareness of the cause and drive donor registrations. The London Triathlon regularly draws in crowds of over 30,000 people, and our team have been training hard for the 1500m swim, 40km cycle and 10km run which will push them to their physical limits in aid of an incredibly deserving charity. Our support of this organisation forms part of our CSR programme and we hope to match the incredible level of donations we have received in previous years.

You can get involved by donating to the official fundraising page, no donation is too big or too small, and we’d greatly appreciate your support in reaching our combined £10,000 target. 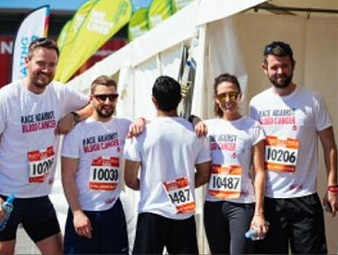 Date: 20 July 2017
Author: Adrian O'Connor
Tags: Charity
back to blog results
Bridging the gap in the finance skills market
READ
Race Against Blood Cancer
Global Accounting Network takes part in the London Triathlon
READ
Flexible working is on the rise
Interesting results from the Chartered Institute of Management Accountants
READ
The Highlights: Our Event Discussing Employee Engagement, Motivation and Retention
READ
Karthi Gnanasegaram
Our Host For Our Event Celebrating Inspirational Women and Diversity In the Workplace
READ
Season 1 | Episode 1 | Del Huse, founder of Roycian Ltd
READ
Global mobility for professionals on the increase
If you have ever considered working abroad, then you’re not alone.
READ
STOP...Don't leave now...
Ask not what my employer can do for me, but also what can I do for my employer.
READ
The Variants Analysis - Episode 2 with Chris Spooner
READ
M&A boom
good news for accounting specialists
READ
Designing Your Interview Process
How to ensure that you secure your perfect candidate in record time.
READ
The Finance Bill
what the cuts mean for accountants
READ
Welcoming Our Part Qualified Division
Spreading our recruitment wings… Again…
READ
Why Atlanta?
Global Accounting Network strives to be different
READ
Mental Health Awareness Week
What can we as employers do?
READ