From finance graduate to CEO: the story of Corie Barry

That’s less than 10% of CEOs on the list, while female leadership as a whole totals only 8.1% across the featured companies.

What does it take to succeed as a woman in this environment? We look at one excellent example: Corie Barry, CEO of Best Buy.

Corie’s rise to the top started with a double major in accounting and management from the College of Saint Benedict. Originally interested in pursuing a career in chemical engineering, she turned to finance after realising that critical thinking and data-driven logic were her forte.

“Right from the get-go, she was one of those people who could grasp a lot of data. She had the ability to take in so much information and really come away with insights,” said Anna Loughrey, Corie’s first boss at Best Buy. “I was basically just predicting when she would be my boss.”

The value of varied experiences

Speaking to CNBC in an interview shortly after being named CEO, Corie explained the importance of having a diverse career history and using that experience in her new role: “I spent time in finance. I spent time actually living and working in the field in retail. I spent time running services. I started our strategic growth office. I’ve had the chance to run our technology teams.”

In Corie’s case, a graduate position in public accounting as an auditor with Deloitte and Touche kickstarted her finance career. It was during this time that she completed and received her CPA certification, prior to joining Best Buy as Financial Analyst in 1999.

From there, she worked across a range of finance positions within the company, including financial planning, retail finance support, online and services finance support, marketing, and even headed up the Geek Squad.

Eventually, she was named SVP of Domestic Finance, where she worked closely with both the CFO and CEO. Having access to these senior leaders offered a fantastic source of knowledge and mentorship for Corie, and highlighted her hard work and creative approaches so that, when more advanced positions arose, she was top of the list for consideration.

Corie’s ability to think outside of the box quickly resulted in a move to Chief Strategic Growth Officer, where she played a critical role in the company’s development and implementation of the Building the New Blue growth strategy - an initiative that focused on strengthening relationships with vendors, revamping stores, eliminating unnecessary costs, and ramping up their eCommerce offering.

Her next move came in 2016, when she was promoted to the position of CFO. Corie’s predecessor, Sharon McCollam, said of the promotion: “With her exceptional financial acumen and deep understanding of Best Buy’s operations, she has been an influential leader over the financial and cost disciplines that have been established across the company over the past several years.” It was clear that Corie’s extensive understanding of the business, developed whilst mastering a wide scope of different roles, was a major factor in her appointment.

Speaking on the topic of growing one’s career and achieving long-term success, Corie emphasises the importance of setting yourself apart: “If you’re curious to listen to other points of view, to seek out the answer, to do the research; if you have the drive to be self-motivated and to push the questions to the ends of the earth; and then if you do it in a way that is ethically and morally aligned with the organisation you’re at - you will stand out amongst the crowd.”

By embracing opportunities for upskilling, whether through role changes or specific training, Corie was able to develop a wide scope of abilities and experience that could then be applied to future positions. Read more about the most in-demand skills in finance in our blog here.

Corie was named CEO of Best Buy at the end of 2019, right before one of the most challenging periods for retail arrived with the spread of Covid-19. She took it in her stride, prioritising digital growth, innovative in-store solutions, and focusing on employee and customer safety. It’s paid off, with profits increasing more than 16% in 2020.

Having a solid financial understanding of the business, and an ability to apply herself outside of her comfort zone and diversify across different roles, Corie’s move to CEO was a reflection of the lifelong learning and constantly-developing approach she has taken throughout her career.

From humble beginnings as a young auditor, to CEO of one of the biggest companies in North America, Corie perfectly illustrates how important it is to build your career with clear goals in mind – even when those don’t follow a perfectly linear path – and to see the value in the learnings of others as you progress in your role.

In a webinar presented by the Consumer Technology Association, she says: “I think CEOs now more than ever need to be in constant learning mode. And it's not just about having the answers based on your own life experience, it's about constantly being willing to learn from the life experience of others as a way to help inform your decision making.”

Do you want to learn how you can elevate your career to CEO-level? Download our complimentary resource, The Accountant to CEO Roadmap here 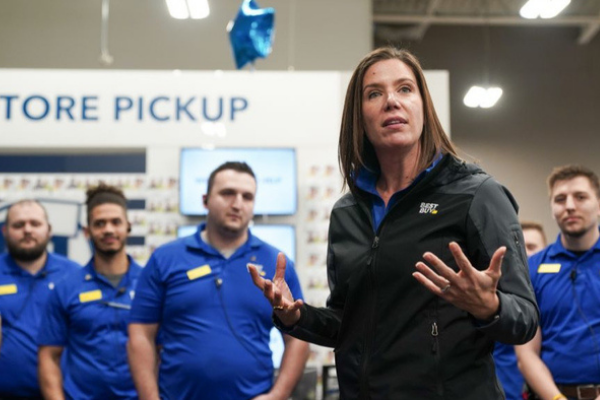 Date: 20 January 2022
Author: Adrian O'Connor
Tags:
back to blog results
The apprenticeship levy
What does the apprenticeship levy mean for the accountancy profession?
READ
The Variants Analysis - Episode 4 with Gavin Adair
READ
Mental Health Awareness Week
What can we as employers do?
READ
Identifying the right perks and benefits for you
READ
Race Against Blood Cancer
Global Accounting Network takes part in the London Triathlon
READ
The Variants Analysis - Episode 2 with Chris Spooner
READ
The Variants Analysis - Episode 1 with Del Huse
READ
The Taylor Review
What impact will the Taylor Review have on financial professionals?
READ
The Variants Analysis – Episode 3 with Edward Jamieson
READ
Invest in the education you need for a successful finance career
READ
Edward Jamieson, Finance Director UK at JUST EAT | How a career doesn’t need to be limited to the big four to be successful and fulfilling
READ
Season 1 | Episode 1 | Del Huse, founder of Roycian Ltd
READ
M&A boom
good news for accounting specialists
READ
Overtime hero?
Achieving true productivity in accountancy isn’t the same as being an overtime hero
READ
Why I Hate Recruiters – By a Recruiter
READ